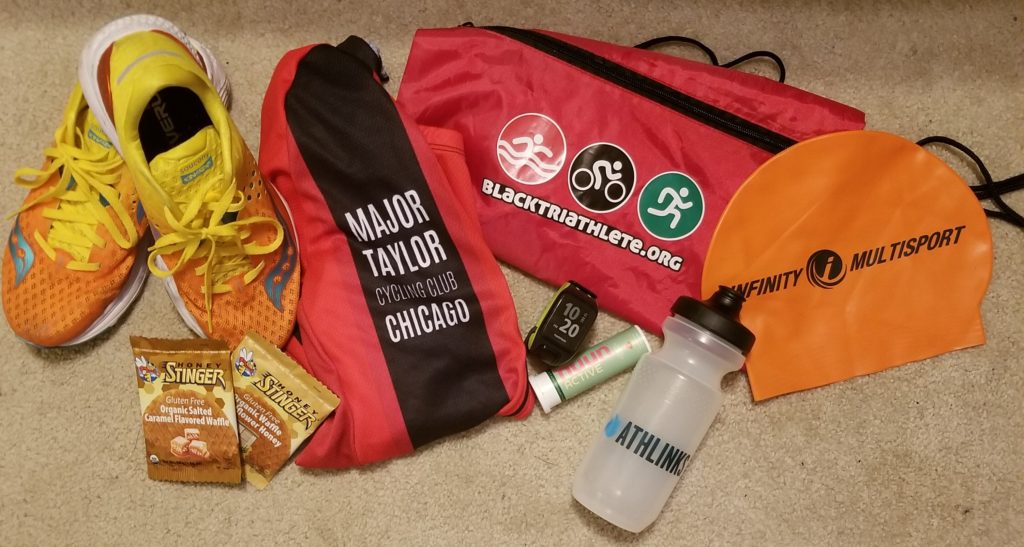 Seeing its the holiday season and people are shopping or looking for gifts and things for the new year, I decided to post a few things as a triathlete that are my favorites.

Honey Stinger Salted Caramel Waffles: 2018 marks the 2nd year that I will be a part of the #HSHive aka Honey Stinger Ambassador Team. Even before I was chosen to be on the team, I had a chance to taste their line of bars, chews and waffles.  The waffles have been a great item to eat post-race, for breakfast, or even a tasty snack before training.  The products have expanded to include many new flavors and most are gluten-free. The Salted Caramel is a favorite that I recommend and share with other athletes.

Saucony shoes: My first few years as a triathlete I tried a couple of different brands of running shoes. Once I got my first pair of Sauconys, which I believe was the Kinvara 2, I was hooked and they worked amazing well for my feet (like a glove), stride, and running distances. Yes, I am a Saucony girl and hopefully one day will be able to join the athletes of their team…especially since at this time, I’m juggling between about 5 different pair of them.

Dick Pond Athletics: This is a great chain of stores based in the west suburban area of Chicago.  I joined the Dick Pond Team because of the training groups they have at the various locations.  Their track workouts (specifically out of the Carol Stream store) really started to make a difference in my running & speed in 2016.  The comradery and the support and resources for the area races are excellent.  And the fact that they partner with brands, including Saucony to provide incentives and benefits to the team is awesome.

Athlinks: It’s pretty cool to have an online resource to manage all of one’s results and events as an athlete. There were races from quite a few years ago that I was able to search and claim to be able to compare how I did in the past to now.  And to have that all in one location has been helpful.  It’s also nice to be able to create your on network on Athlinks by adding others that create a profile as friends or create rivals.  And being new to their #AthlinksIgnited team for 2018 is an honor.

Major Taylor Cycling Club: This club has been a true family to me, even in the short time that I’ve been a member.  I had known of them for a few years, but just began riding with them in 2017.  They provided so much great feedback on riding techniques and gear, plus you learn so much on the different rides that improve your cycling performance. Unfortunately, I had a bicycle fall in August, but the riders I was with pretty much saved my life and looked after me.  Not just the day of, but days and weeks afterwards, the calls and flowers and love they showed me was truly appreciated.  I hope to serve in a role to be able to contribute to the club in 2018.

Nuun: There are only a couple different hydration drinks I’ve relied on in the past few years, and Nuun tablets has been one that is efficient and effective.  Just having a regular bottle of water and dropping a tablet or 2 into it instantly allows me to have something to replenish my body after hard training sessions, workouts and races.  There are so many different flavors to chose from that its easy to find one or two that you love…one of mine is the Watermelon flavor.  And I’m so excited that just this week, I was announced to the Nuun ambassador team.

Black Triathlete Association:  To have a family of fellow black triathletes has made a real difference in the sport in the last few years.  When I first started racing 10 years ago, it was rare to see African American triathletes at events.  Now, not just at various races, especially the larger ones, but also in the online presence, you see so many black athletes taking on duathlons and triathlons.  To have a group like BTA that provides support, resources, and encouragement has been a blessing.

Tom Tom Sports Watch: Most of my fellow runners and triathletes are partial to Garmin, however, I gravitated to Tom Tom. Initially, I was looking for a not so expensive watch that could track at least the 3 disciplines of swim, bike and run, BUT also one I could put music on and be able to train or race by connecting via Bluetooth to wireless headphones. (Years of racing with my phone on an arm sleeve had to go).  Tom Tom was the answer.  Plus the ease of its functionality and ability to sync with other apps made it a preferred watch for me.

Black Chicago Runners: Relatively new in 2017 to running with this group, the individuals that make up BCR are uplifting, encouraging, will challenge you, and fun.  Having a group of people that run at various different levels and see them share their trainings, races, victories, failures and accomplishments, it like seeing a multi-scripted movie with different stories, twists & turns. The biggest part is BCR is a run family.  Be it meeting up on weekly runs, creating a challenge to push you to try something new in your workout or training, support at races, a photo shoot or social event, there are so many opportunities to come together and enjoy the various aspects of the group.

Infinity Multisport: Years of training mostly as an independent athlete yielded some great results and allowed me to develop my focus and determination, however, like anyone seeking to get better, a coach is the answer.  In 2016, I began swim training with Infinity, because despite about 8 years of racing, I still had uneasiness with open water swim and needed to work on my form.  Just 1 or 2 swim sessions with Lara & Mo and I instantly started to feel more confident and faster in the water.  They have developed training around swimming, biking and running at various locations and times to meet the diverse need of different athletes.  Compu-trainer bike sessions, track sessions, swim drills, open water sessions and more are a few ways they transform the skills, abilities & results of athletes.