I remember the first time I saw my dad shed tears. I was 11 years old and laying in a hospital bed. A few days before, I had fallen off my bike and unbeknownst to us for days the impact of my handle bar hitting my side has punctured my liver and I was bleeding internally. The realization that if we had waited much longer to go see a doctor, I would have died was likely overwhelming for my dad with the thought of possibly having lost his baby girl. I was moved and in his tears I saw love.

My older brother Darrick for years had struggled with addiction both of alcohol and drugs. It started to show to me when he was around age 20 and I was 10. It wasn’t obvious or talked about with me around, but even as a child I could sense he was dealing with something. Times when he “messed” up and lost a job or wasn’t really around, though I didn’t know fully what was going on, I could sense his shame, as well as his struggle to get back or stay on the right path. I didn’t see tears, but when certain things happened, sometime he held his head low or he’d disappear for a while. Despite the highs and lows, our family loved him through his struggles.

My father was not tall in stature, but rather quiet but commanding, devoted, and a pillar of strength. And my brother was jovial, lovable, and yet intriguing from the viewpoint of a younger sibling. Growing up having witnessed 2 of the men closest to me in vulnerable moments, actually seemed not just normal, but I realize it’s impact allowed me to embrace it. In their vulnerability, I saw personal battles, despair, seeking help, fear, relief, as well as love. And what I most appreciate about having seen those things in Black men, was their honesty and authenticity while being able to relate and have compassion. It wasn’t until most recent years that I realized that my view of Black men’s vulnerability is very much the polar opposite of the popular society’s view. 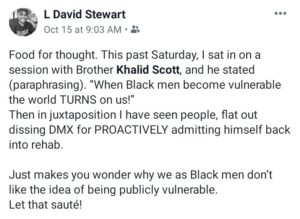 I tweeted years ago “There is strength and beauty in vulnerability”. In particular, in a world that socializes men’s strength with being tough, hard, taking it, not crying, not showing emotion; to me the idea tying that to the vulnerability of a black man is not authentic. That is not REAL. Society associates vulnerability with only being weak, when in actuality if one shows his/her most authentic self (joys, pains, hurts, highs, lows), that is their most full and beautiful self. That is the complete picture, versus portions that people WANT to show or others WANT to see.

Interestingly enough, in a conference I attended this past weekend, the following quote was shared in a session led by my friend, Safiya Omosanya.

People have said, “Don’t cry” to other people for years and years, and all it has ever meant is, “I’m too uncomfortable when you show your feelings. Don’t cry.” I’d rather have them say, “Go ahead and cry. I’m here to be with you.” – Mr. Rogers

This quote begs me to ask the question, “What is it about the tears, emotions, vulnerability, authenticity of BLACK MEN that makes people so uncomfortable?”

In an effort not to turn this into a multi-page thesis, at this time I won’t delve into historical racism, various systems and other aspects of why even the mere presence or existence of BLACK MEN seems to make people uncomfortable, however, it is an attempt to answer this question from the perspective of Black women and overall we as Black people.

Often it is Black women or other Black men that have critiqued, disengaged, scorned, upheld toxic environments and contributed to Black men not having spaces to be vulnerable, but why?

One rationale is what feeds into the continual competition between Black men and women of who has it worst. With all the systematic entities that uphold not just racism, but sexism, class-ism, equity, and more that continue to impact not just Black men and women separately, they also feed into their continual divide and conquer, and as a result, us attacking as well as dismissing each other. Hence from a Black woman’s perspective, dealing with added challenges of her own, there is a de-sensitizing of compassion and understanding of what Black men deal with. That coupled with the societal’s view that “men are meant to be tough and can take it”, there is no desire to express empathy for a man when he does show vulnerability.

Historically, society seeks to and continually dis-empowers Black men and without truly understanding this, when a man is struggling to simply get a job or career, or protect his family, or provide for his family/children, if he expresses frustration, depression, being overwhelmed, those societal factors are not given consideration. As a result, the man is either blamed, dismissed as not doing enough, or looked at as if something is wrong with him for not being able to rise above these challenges.

But to look even deeper into why this is, is to look at people as a society in regards to what we accept, take in, and desire versus what we avoid. To be fake, put on a facade, hide the truth, not deal with deeper issues is easy and what we as a society embrace. Think about it. Instead of dealing with causes of illness, we address symptoms (look at cold medicine). Instead of addressing the source of depression, anger, feelings and emotions, we drink, party, have sex, use drugs, become work-a-holics and do things to numb ourselves to keep from addressing our pain and other issues because it’s easier. When it comes to our BLACK MEN and their needs, emotions, struggles, and more; to actually engage in those conversations, to listen, to face what it is they truly have to say…not only do we possibly fear that, but it may be hard to hear what they have to say especially if it shines a light on others behaviors or lack of wanting to address. To do those things is hard, so the easier thing is to just say “man up”, “what are you trippin’ about”, “y’all think you have it hard, what about me”, which ultimately deflects from going deeper, truly creating a space for Black men to be vulnerable, and actually dealing with it all.

We don’t want or like to see pain, hurt, hardship, failure and various so-called “dark” facets, but in seeing them, we are faced with needing to address them and often times it means 1) addressing those things in ourselves or 2) facing how we have and/or still are contributing or perpetuating them. And those 2 things, make us as humans very uncomfortable.

Like in many arenas, we as humans don’t like being in spaces that are uncomfortable, however, it is in those spaces that growth and change take place. To see Black men not being able to or no longer desiring to express feelings or things they are dealing with because of the reaction of others, is not acceptable. We can’t continue to alienate, emotionally castrate, and devalue their voices. Through their laughter, tears, hugs, smiles, plans, dreams, ideas, tweets, posts, barber shop & street corner conversations, and so much more, they have POWERFUL perspectives, and insights to share…if we are willing to listen and respect. To embrace the vulnerability of Black men is essential, not only for Black men, but for us all.