A few weeks ago I was leading a ministry meeting of active adults, former and current athletes. I asked them to share a Olympic, sport or athletic moment that they felt inspired them the most.  As I hope to touch and inspire others, I often reflect on past moments that I witnessed that truly touched and inspired me and thought to share them in this post.

I’d have to say that the first monumental moment I was able to observe as a child was Mary Lou Retton winning the Olympic Women’s Gymnastics All-Around gold in 1984. Around that time, I had been taking ballet, tap and tumbling classes, so to see a young girl achieve such a feat was remarkable.  I didn’t go far into gymnastics, however, it taught me that no matter how young or small you are, you can accomplish big things.

Not that I recall a whole lot of details of the game, however, to see and experience the win and the reaction of the city of Chicago when the 1985 Chicago Bears won the Superbowl, was simply remarkable.  There was a connection and something to love about so many players on that team.  The toughness of Michael Singletary, the agility of Otis Wilson, speed of Willie Gault, the boldness of Jim McMahon, the teddy bear smile of William ‘The Fridge’ Perry, and of course the skill, talent and air of a gentleman in Walter Payton.  I had a shirt or jersey of some sort of each of them and not to slight Leslie Frazier, Dave Duerson, Richard Dent, Kevin Butler,…and the list goes on.  A team as tough and deep as them taught me that it doesn’t always look pretty.  There are times when you have to be tenacious, gritty, get dirty and especially when it hurts or in pain and think you may have nothing left, you can dig down deep and be unstoppable.

Another moment I was blessed to see that moved me was watching Florence Griffith Joyner aka ‘Flo Jo’, Jackie Joyner Kersey, and Carl Lewis sprint into gold in the 1988 Olympics.  It was amazing to see the beauty and splendor of Flo, the multiple skills and dynamic endurance to excel at so many events by Jackie, and the power and tenacity of Carl all at the same period of time.  I’m sure seeing them planted seeds for me as I later ran, jumped, and hurdled for 4 years of track and field in high school and later becoming a triathlete. 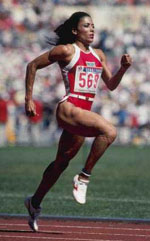 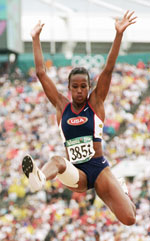 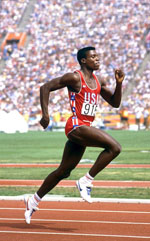 June of 1991 was one of the most joyous months for me. After watching 2 years of the Chicago Bulls being defeated in the playoffs, I had such a belief that Michael Jordan would be the one to lead us to an NBA Championship.  To say I was a Bulls fan was an understatement as I had rituals before & during each game that made family members laugh. (ie, playing cards, gear, mementos and thank you to my brother, Ken for my Bulls chair, which became my game watching throne..lol). Watching the Bulls finally defeat the Pistons was a relief and up’d the ante, however, the final moments of game 5 versus the L.A.Lakers, was nothing short of exhilarating. This was so much so, I recall darting outside and screaming to the whole neighborhood that the Chicago Bulls won their first NBA Championship.  It still makes me smile to recall.  I must say that for me, it was just as moving to recall the losses of previous years. To know that amidst failure and defeat, that in continuing to push, stay focused, and be determined, dreams and goals are still attainable.

There are times when I’ve honestly thought that gymnasts are the toughest athletes in the world.  I found it remarkable that they often have morning and evening practices every day, their sport is based off them being as close to perfect as possible, and they come in the tiniest packages but have so much strength while often performing injured.  Having the competition on VHS, I find myself often replaying it to watch a group of phenomenal young ladies called the Magnificent 7 of the 1996 Olympics who definitely wowed not just me but the nation that year.  Shannon Miller and Dominique Dawes had been favorites of mine since before the 1992 Olympics (and even still), so to see them lead the team to Olympic gold allowed us to see a rarity in not just making it but also medaling in a second Olympics.  Particularly, Dawes became the only gymnast to medal in 3 Olympics, at time when there haven’t been a lot of African American gymnast on top, but also it is typically thought that you’re too old for the sport.  To see such persistence allows me even now to embrace that it’s never too late accomplish big things and shoot for what may seem like impossible.

As you can probably tell, I am a fan of gymnastics and in recent years to see Gabrielle Douglas win  the 2012 Olympic All-Around Gymnastics gold brought a since of pride especially for young African American girls, who I feel don’t have enough role models in the media outside of arenas that focus on looks and body image.  This moment is one that I shared at the group meeting I mentioned, mainly because of what Gabby said after she won.  It’s a quote that speaks to how I long to live my life in all areas, but especially as an athlete to not lose focus on why I do what I do and a reminder of what/who it is for.  She said “I give all the glory to God. It’s kind of a win-win situation. The glory goes up to Him and the blessings fall down on me.”  No matter how many medals, events and accomplishments life brings, they are all fleeting.  At the end of the day, it’s all about ensuring that what I do in life is in line with why I am on this earth and the fruits of my work, my life are for the one who created me. 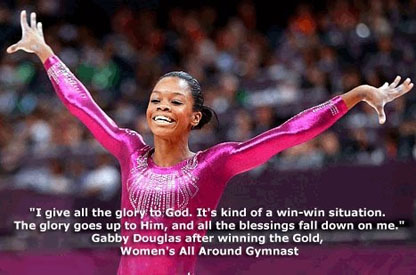 Well, I actually don’t have a 7th inspirational sports moment.  Yes, I have witnessed many other exceptional moments in various sports, however, none that have moved me greatly or that I feel have deeply impacted me in a profound way.  However, there are many individuals whose careers I follow and I must say I’m fans of, including: Alyson Felix (whose image has graced my vision board for a few years), Serena Williams, Simone Biles, Stephen Curry, Misty Copeland (yes, I consider dancers athletes, as well), Matt Forte, and Gwen Jorgensen.  I look forward to seeing more uplifting and truly extraordinary moments in sports in the future.

Which moments deeply impacted you and how did they inspire you?