Sooooo, I’ve made this statement before to family and friends that “I don’t really date”, which probably perplexes some people. Yes, I do want to get married, have children, share love with a special man that is meant for me. And yes, I do go out and enjoy lunches, dinners, dancing, fun things like bowling, movies, concerts, and more. So, let me go ahead and clarify a few things, as well as any thoughts on my belief in one day having the life of marriage and family without “dating”.

My take on dating is when people make a planned attempt to get together to see if they are compatible and should further develop a relationship. Often it is initially based on one or both individual’s physical attraction or it could also be based on some initial exchange that arouses curiosity to learn more about another person.

Honestly, I’ve never really felt comfortable with the initiation of “dating”. Everything from speed dating, online dating or matchmaking, meeting in a store and being asked for your number, exchanging ideas and contacts at a business or networking event and getting a follow-up text or phone call to ask you out to lunch or dinner (not based on business), or even enjoying a group outing with familiar people to later have someone poke you on Facebook, often have an uneasiness to me.

Now, to each his own and I’m not here to tell people what to do and I get that many have gotten married and been happy with these types of exchanges.

I’ve just always felt that in dating many initially put their best foot forward and show only the kind gestures and good things about them. Sometimes these invitations come way too soon. I mean why should someone give you their number after just encountering you one time. Often dating is motivated by a person’s desire to be taken out to eat, drinks, sex, a ring, money, not to be lonely, to have children, and not by an understanding that this is part of my life’s journey or purpose and whom is meant to be part of it.

I’m just going to state that there is a different between dating and courting, and some of the examples I’ve just outlined, at times leave some people feeling uncomfortable and awkward…particularly if you don’t even know the person that well or just aren’t interested. I mean, based off a chance encounter or even a cool conversation does not necessarily give people enough to want to be further engaged or get to know one better. That expression that there are people in your life for a reason, a season, or a lifetime is very true and some are meant to be passing acquaintances, others close or distant friends, others you may experience in relationships to reveal lessons, prepare you for things to come, and even more.

I’m a big believer in what is meant to be will be. I also believe in discernment, patience and truly paying attention or being present. Often circumstances and opportunities will present themselves for you to engage with people who are meant to be in your life. Also, I think it’s important to take time to know yourself and listen to that voice that reveals to you “direction” so know where things are meant to go with someone else and if you should and how to act upon it. Being able to receive and understand the reaction from that other person is also key. If it feels forced, it probably is. And timing is also important too.

One book that I highly recommend is “Choosing God’s Best” by Dr. Don Raunikar. I’m also finding interesting the release of “The Wait” by Devon Franklin and Meagan Good. 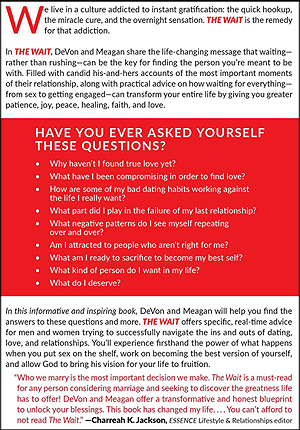 So, I’m not saying not to ask someone to lunch, dinner, coffee, a movie, or to kick it to a club or event. However, it is important to understand your own motives or intentions, be clear, discern the state of your relationship, if there is one or even if there should be, as well as being able to respect others and where they are in their life. What about the idea of being friends, co-workers, neighbors, colleagues where opportunities present themselves for people to enjoy themselves and yet still get to know one another and through those engagements you may both come to a point where you realize a foundation for something more has developed? Or NOT, and that’s ok too. At that point hopefully communication does not feel awkward, forced or one-sided. And hopefully, not only have you seen each other at some of his/her best, but also the flaws, weaknesses, and idiosyncrasies that may drive you crazy, but you’ve come to love him/her despite them.

There may be someone out there that is not a perfect person, but is perfect for you and will come into your life at the perfect time. Knowing who, when and where will be revealed to you and it’s not necessarily in you going out to look or hunt for them. Through you being who you are meant to be, doing what you are meant to do, and them doing the same will allow for your paths to cross, as well as your intrinsic gifts showing you if, when and where things should go and the ability to engage and act on them.

I’ve stated before that where you are in life is as it should be at this very moment and the journey of life will take you to various stages and down various paths at the appointed time. In the meantime, continue to take in the blessing of your life and all that it entails, as you have grown and been shaped into the person you are right now and will continue to grow and be shaped into the person who you are meant to be, as well as with the people who are meant to be a part of it.