“It’s just those rainy days…til the sun comes out and shines again…” – Mary J. Blige ft. JaRule. When this song came on on the ride back to Chicago, I had to burst out laughing! Yes, indeed it was a rainy day.
I must say that the usual build up til my first outdoor triathlon of the year, had it’s usual characteristics. Slight anxiety over not having had even 1 outdoor swim before hitting open water in a race, continual days of rain with limited outdoor biking, and just not feeling as prepared as I’d like were just a few of them. With it being a very hectic time of the year for my work responsibilities, my training hasn’t been as consistent as I’d like. This weekend’s Grand Rapids Triathlon was to be a litmus test to see where I am and what improvements I will need to make to hit goals.
After years of racing Sprint distance triathlons, to start off the year with an International/Olympic distant race (of which this was only my 4th, 2 of which were shortened due to weather), this would be an interesting test of my endurance & resolve. The optimist in me had hoped for a brief sprinkle for the rain predicted the hour before the race was set to begin. It seemed as though it would be the case until about 6:30am. Then the downpour began. Just as this and the narrow and awkwardly long transition seemed to be a damper, to hear that the water temperature was 71.2 was the most encouraging news.
As I typically do, right before the race I was replaying in my head my game plan for the swim. Don’t go out too fast, focus on a rhythm, if needed get over on my back and breathe, look at the buoys to see my path, focus on you, a brief prayer and acknowledgment that God’s got me, and then it’s time to go.

Six of us from Infinity tri fam were racing, 4 of which were in the same wave, and it’s always encouraging to have teammate & family support.

With pause in the rain & the completion of countdown to the swim start, our wave, which happened to be the last, headed out. I opted to let a few people behind me past and not to try to go out with the general line of folks in front of me. Arms, legs, maneuvering around folks only serves as a distraction to me from getting into my own zone. And even still for the first 300-400 yards, I tried to take it easy to get into a rhythm. Though I wasn’t fighting the water, I seemed to be over-exerting myself and was not in a comfortable rhythm. I got on my back about 3-4 times to simply breath and relax. Though negative thoughts at times creep in my head on the swim, that’s when the self talk begins. “I’m not being pulled out of this race”. “Just get to the turnaround and you can coast on in”. “You can do this”.
And of course, one of Coach Mo’s last text stated “On Sunday, just think of the first 3 buoys as warmup.” Well, I guess he was on point because it took to about the 3rd buoy and then I found my rhythm and was focused and in my zone. Within the somewhat ‘U’ shaped path we took, by the time I reached the 2nd turn around buoy, I felt pretty great and like I was picking up speed.
Upon re-hitting the shore, I could mentally exhale, and it was time to make up lost ground not being a fast swimmer. However, with it raining off an on in sections on the bike course, many of us take heed on the bike for safety reasons (slick or wet roads are not ideal).
Knowing that I need more consistent training rides, I still wanted to try and push it to see what could do. It felt pretty good to ride a relatively flat course with a few rolling hills. It was a quiet, wet, periodically raining, straight shot out and back. 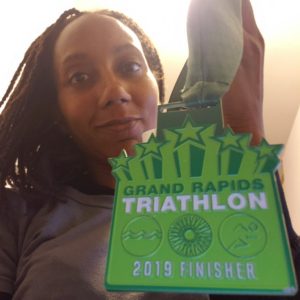 Returning to transition to prepare for the run, thoughts focused on the slightly different feel of doing an Olympic-distance triathlon versus a Sprint. The first 3 miles were within my relatively acceptable pacing with how I was feeling, however, I started feeling a cramp in my side so I tried to take it easy. The last 3 miles weren’t my best. Anytime I stop even briefly, that is not typical. A little hydration and my first try at pickle juice was an attempt to ease my cramp. Yet, I did say this race was a litmus test, so though this was not even close to my best nor near my average runs, this was a good thing. Sometimes having a race that is not ideal or even bad race is motivation.
This race set a foundation for me to get my training up to where I need to hit my marks. And at the same time, believe it or not, this race was a PR for me. Though not that disappointing since I’m a strong runner, my run was 2 minutes slower than my past Olympic triathlon. However, with a similar bike and transition times, guess who cut almost 7 minutes off her swim?
As thrilled as I am about that, putting all three together for my upcoming races is the goal! So, let’s gooooo!